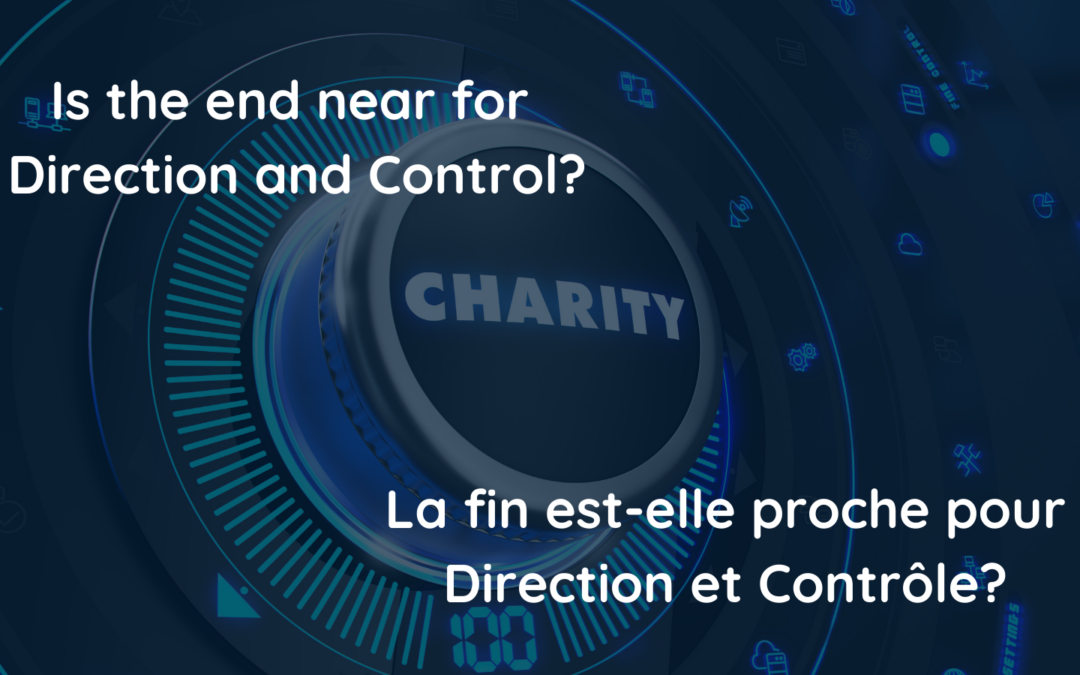 Why are we (still) talking about the Canada Revenue Agency’s ‘direction and control’ requirements?

The international cooperation sector is undergoing a transformative shift: global governance frameworks are increasingly highlighting the importance of establishing equitable partnerships with local civil society organizations and other non-traditional partners in pursuits of healthier, more equitable and sustainable world for us all. These principles are recognized across global frameworks such as the 2030 Agenda for Sustainable Development (2030 Agenda), the Grand Bargain for Humanitarian Action, and policy instruments such as the recently approved Recommendation on Enabling Civil Society by the Development Assistance Committee of the Organisation for Economic Cooperation and Development (OECD DAC). Canada’s domestic policy framework, such as the Feminist International Assistance Policy (FIAP) espouses the same values. However, the ability of Canada’s charities to establish equitable partnerships with diverse actors working in domestic and international contexts is constrained by the 70-year-old legislative framework dubbed ‘direction and control.’

What is ‘direction and control’?

Canada’s charities are regulated by the Canada Revenue Agency’s (CRA) guidances CG-002 and CG-004 which respectively set conditions for Canadian charities to work with non-charitable actors internationally and within Canada. Building on Income Tax Act (ITA) provisions dating back to 1950s, these regulations represent a global legislative exception, requiring all registered Canadian charities to implement their ‘own activities’ when working with non-registered charities, and to exercise ‘full direction and control’ over those activities.

For Canadian registered charities supporting a project of a local partner without a charitable status, ‘direction and control’ regulations dictate the need for a written agreement that relegates these local partners – who are generally the ones with context-specific knowledge, community ties, and the initiative behind the given project – to the role of ‘intermediaries’ in need of micromanagement. In other words, staff from Canadian charitable organizations are legislatively obligated to insist on compliance processes that undermine the agency and the independence of actors without a charitable status.

In humanitarian contexts where these constraints cost lives and livelihoods, Canada’s charitable organizations again represent a global exception. In the aftermath of disasters and crises, speed and coordination matter. This is why the global community is increasingly working with ‘pooled funding’ where various actors contribute to centrally coordinated response delivered by pre-vetted local actors. Canadian charitable organizations cannot legally participate in most pooled funds and are forced to spend more resources on burdensome reporting requirements. This means that the contributions Canadians direct to solving global challenges are spent less effectively.

How is Direction and Control perpetuating inequality?

Direction and control legislation disincentivizes Canada’s charities from supporting nonprofit and community organizations, as Kevin McCort, the President and the CEO of the Vancouver Foundation confirmed during Cooperation Canada’s Forum 2021, saying that “domestic funders are also increasingly finding that the definition of charitable purposes has excluded a number of groups (…) so we can’t fund (…) community groups, but they are doing the kind of work we want to fund in service of our charitable purposes.” While local actors are proven to be the most effective in addressing community needs including throughout the COVID-19 pandemic they receive insufficient support.

The more marginalized a community is, the less likely it is to have a charitable status. By making it harder for equity seeking groups to access funding, Canada’s legislation is perpetuating inequality. Results of such systems are clear: a Carleton University domestic study found that only 0.7% of grants issued in 2017/2018 was allocated to Black-serving organizations, and just 0.07% to Black-led organizations. Similarly, this analysis of the Registered Charity Information Return database for 2018 shows that Indigenous Groups (defined using the Indigenous Peoples Solidarity Fund developed by Wanda Brascoupe for CanadaHelps) received only $1 for every $178 allocated to non-Indigenous groups.

Internationally, the figures are not better. This 2016 OECD report shows that less than 1% of global funding is allocated to women’s rights organizations in historically disadvantaged countries, and the 2021 Grand Bargain report found that the commitment of ‘localization’ has not been achieved.

How were the ‘direction and control’ regulations updated in November 2020?

In November 2020, CRA updated the above-listed guidance documents for clarity and context-informed amendments. During the same Forum 2021 session in June 2021, Tony Manconi, the Director General of the CRA Charities Directorate outlined these updates. Efforts to clarify the terminology entailed, for example, replacing expressions such as ‘agent’ and ‘agency agreement’ with ‘intermediary’ and ‘intermediary agreement’ and spelling out the definition of the term ‘capital’ to include ‘real property land’ and ‘immovable property on land.’

In terms of the changes that do, effectively, shift CRA expectation, a notable update is that of the increased threshold for projects requiring formal agreements from $1,000 to $5,000. Moreover, CRA will no longer require that non-charitable partners use a separate bank account for charitable funds, but the financial records will need to be fully accounted and linked to the reported expenditures. According to the latest guidance, charities are expected to show ‘direction and control’ via written agreements, detailed descriptions of project activities, monitoring and supervising, regular reporting, ongoing instruction, periodic transfers, and clearly separated activities and funds. The new guidance also clarifies the definition of ‘adequate books and records’ for low and high-risk categories.

While helpful, these amendments made by the CRA do not resolve the central concern of ‘direction and control’ focused on micromanaging local partners’ activities and undermining their agency. With the ‘direction and control’ test solidified in the legal precedence and case law on the Income Tax Act, room for regulatory flexibility on the part of CRA is extremely limited. To truly amend this outdated framework, a legislative change to the ITA is required.

What is the proposed legislative approach?

Significant efforts have been made to inform legislative reforms of the ‘direction and control’ framework. The Advisory Committee on the Charitable Sector (ACCS), established in 2019 to promote dialogue between the CRA, the Department of Finance, and charitable sector experts, has issued recommendations outlined in the January 2021 and April 2021 aligned with previous reports carried out since 2012. These include the 2019 Report of the Special Senate Committee on the Charitable Sector, which suggests removing the ‘own activities’ test from the Income Tax Act and focusing on the expenditure responsibility test instead. The Government response to this report, however, has not outlined a clear way forward.

To move away from activity-based compliance approaches and strengthen financial accountability of charitable actors, Senator Ratna Omidvar proposed the private members Bill S-222, which passed in the Senate on 17 June 2021. As the Senator explained during the June Cooperation Forum session, Bill S-222 builds on examples from countries like the United States and focuses on financial accountability, which leaves further room for subsequent CRA regulations to be developed in consultation with the sector. Furthermore, as a group of charitable lawyers supporting this bill claims, the bill does not erode existing guardrails around other aspects of charity regulations, including those related to anti-terrorism and proceeds of crime (money laundering).

According to Senator Omidvar, Bill S-222 aims to strengthen accountability provisions by expanding the definition of charitable activities and defining reasonable steps for ensuring resource accountability. This includes replacing operational direction and control with full upfront due diligence and establishing partner agreements that would, in line with international standards, list expected outcomes and the impact, reporting requirements, as well as budgetary and activity-level commitments. Non-charitable actors would remain accountable for the use of resources towards declared charitable purposes and desired outcomes, but the legal responsibility for project management and financial control would rest within their institution.

What are the potential next steps?

Bill S-222 was approved in June 2021, thanks to the all-party support of the Senate, which according to Senator Omidvar suggests a common understanding of the importance and the urgency of the proposed amendments. MP Philip Lawrence, the Conservative Party Critic for National Revenue, had committed to tabling the bill in the House of Commons. However, Canada’s federal election has interrupted this process of legislative change and this fall, the bill will need to be re-introduced.

Should Bill S-222 pass both the House of Commons and the Senate this time aroumd, CRA will have two years to produce regulatory guidance that operationalizes the new provisions and clarifies what, for example, an acceptable due diligence process or a partnership agreement would entail.

How can Cooperation Canada members get engaged?

To support sector efforts to amend the ‘direction and control’ legislation, Cooperation Canada members are invited to join a working group dedicated to this agenda. The group will be co-led by Céline Füri (Oxfam-Québec) and John Clayton (Samaritan’s Purse). The group will share intel, resources, and coordinate advocacy outreach in collaboration with other domestic groups. To get engaged you can: