All Eyes on Canada to #FightForWhatCounts

More than two years into the COVID-19 pandemic, its impacts on communities are still emerging, as the world copes with the loss of millions of lives and livelihoods.

While the world rethinks what victory over the virus looks like, what remains clear is the need for a collective roadmap for equitable recovery and to prepare for the next pandemic. Fortunately, there are existing mechanisms that are well-equipped to support the world in building this – entities that have the knowledge, expertise, and global networks necessary to respond to the pandemic, recover from its effects, and prepare for future threats. The Global Fund to Fight AIDS, Tuberculosis and Malaria is one such mechanism that has two decades of experience in combatting the world’s deadliest infectious diseases, and, more recently, contributed significantly to the global COVID-19 response. The result: 50 million lives have been saved.

When the pandemic hit in 2020, the world was unprepared, but existing tools and infrastructure for other diseases like tuberculosis (TB), helped jump-start a global response. However, with diversion of resources away from longstanding infectious diseases to address COVID-19, the world witnessed are resurgence of HIV, TB and malaria. The number of TB deaths globally increased for the first time since 2005 – with a staggering 1.5 million deaths in 2020. There were 69,000 more deaths from malaria in 2020, compared to 2019.  In response, the Global Fund doubled down efforts to help countries respond to the new virus, mitigate its impact on lifesaving HIV, TB and malaria services, and make urgent improvements to health systems. Through these efforts, Global Fund-supported programs have begun to slowly recover from the setbacks caused by COVID-19.

Now more than ever, it is critical that the Global Fund receives the support necessary to continue this important work and get the world back on track to ending the epidemics. Earlier this year, the Global Fund released its investment case for its Seventh Replenishment, calling on donors to help reach the USD$18 billion – the minimum needed to save an estimated 20 million more lives. Due to increased need amid the pandemic, this is about 30% higher than the $14 billion raised at the Global Fund’s Sixth Replenishment in October 2019.

Since this call for funding, civil society organizations in Canada have rallied alongside other organizations from around the world to ensure that donor countries meet the required figure. Among our G7 allies, we have seen the United States, Germany, and Japan announce their support for the Global Fund’s Seventh Replenishment by committing to increase their pledges by 30% from the previous funding cycle. Advocates in Canada are now looking to our government to follow suit.

A coalition of 14 civil society organizations across Canada, including Results Canada, have been at the forefront of this campaign, joining forces to ensure that Canada steps up as leader at this critical moment. Over the past several months, the coalition has engaged in various advocacy activities to make our ask of Canada loud and clear – CAD$1.2 billion to the Global Fund’s Seventh Replenishment, not a penny less. Canadian partners kicked off the campaign with a Week of Action back in May, where participants from across the country met with 40 parliamentarians to gain their support for Canada’s investment in the Global Fund. The coalition then took to the streets at Toronto Pride Parade and, more recently, at Ottawa Pride to show our collective support of the Global Fund, emphasizing the partnership’s efforts to protect the LGBTQ+ community. In July, coalition members attended the International AIDS Conference in Montreal, where we continued to advocate for a fully funded Global Fund. The efforts of this coalition have secured parliamentary support from 50 Members of Parliament and Senators from across all political parties, who see that the Global Fund is critical to ensuring health equity for all.

After months of advocacy, the coalition of Canadian civil society organizations, alongside citizen advocates from across the country and affected communities around the world, are looking to Canada to step up with CAD$1.2 billion at the Global Fund Replenishment Conference in New York City next week. There is no option but to invest strongly in the Global Fund, as millions of lives depend on it. Your move, Canada. 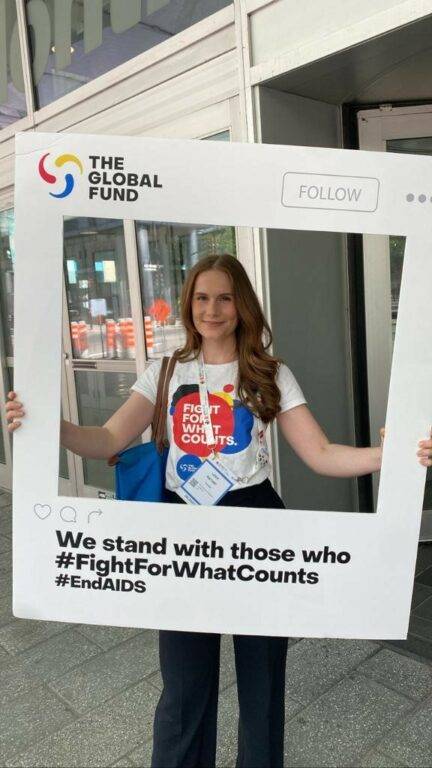