A conspiracy with hope 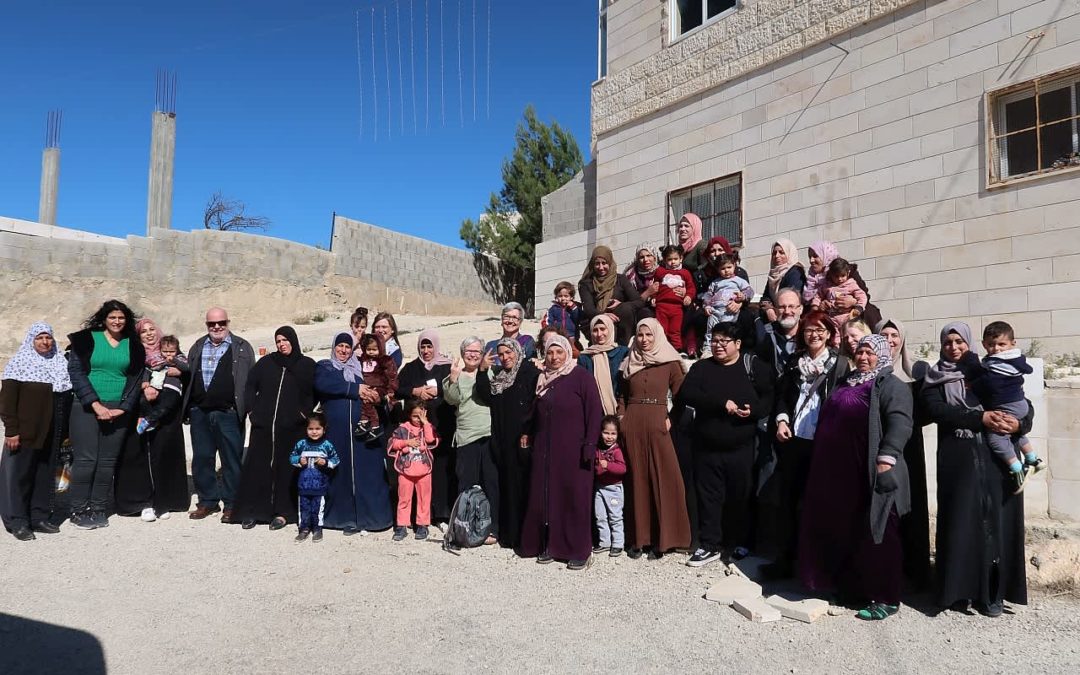 For International Development Week 2020, we are showcasing the impact that our member organizations are having around the world. This blog post, from Jennifer Henry of KAIROS, is the third in a special series. Make sure to read it and share it with your network!

i have rarely seen anything as beautiful as the group of women and children who gathered to meet the KAIROS delegation in Thabra in the West Bank. About 30 women and young children, all so incredibly welcoming with smiles and handshakes, greeting our delegation of ten Canadian church leaders and staff to Palestine and Israel. They told us later that international folk rarely visit, and if they do, it is certainly not to listen to women living under occupation.

This visit was the first of four meetings with women’s groups supported by KAIROS and Global Affairs Canada and led by Lucy Talgieh, Women’s Project Coordinator of Wi’am: Palestinian Conflict Transformation Center.  In these groups, women find friendship and psycho-social support as well as learn about human rights and building capacity for leadership in peacebuilding. Wi’am is a vital part of Palestinian civil society providing a space where Palestinian communities learn about reconciliation, discuss conflict resolution, and imagine a life that is not lived under occupation.

In Thabra, the surroundings for the women’s group were meagre. Chairs were a recent addition, paid for from a staff person’s own pocket. But the hospitality was generous and the conversation animated and powerful. And the children…well, they warmed every heart.

The women were anxious to share. They told us about how they are solving local garbage collection issues and strategizing to improve access to health services. The nearest clinic is a very long walk away and not always open. The women spoke proudly about how they were learning about their rights, including the Convention on the Elimination of Discrimination Against Women, and what a difference it was making in both their capacity to protect themselves from violence, and in the possibility of moving towards greater leadership in their communities.

Here in the West Bank, the occupation means misery and terror. That day we also visited Beit Umar, where we met a woman who has five imprisoned sons. Most of the women in that group had at least one relative in prison. The constant presence of heavily armed Israeli soldiers makes them fear for their children as any move that can be perceived as provocative can lead to immediate detention or even trigger a lethal response.

Many spoke of ever more aggressive restrictions on access to land and agriculture. All face ongoing humiliation and challenges moving about the area. Lack of consistent access to employment or even to basic needs such as clean water are daily hardships. Even as visitors, our delegation risked settling into despair as we listened to the women’s stories.

As a delegation of Indigenous people, settlers and newcomers, the commonalities between the struggles in this contested place and in Canada and other countries were not lost on us. Dispossession, lack of access to basic services, restrictions on movement, loss of control over resources, violence, particularly against women – these are common experiences in Indigenous communities the world over, an acknowledgement that was always unsettling.

And yet, what we experienced in these women’s groups, in Thabra and Beit Umar, and others in Jericho and Bethlehem, was pure hope. They said it themselves. In Beit Umar, one of our delegates asked where the women found their hope in the face of the relentless injustices of the occupation. This group of largely Muslim women responded, “Our faith in God of course.” Then Mariam added, “This is also what gives me hope – this place where we come together as a group to heal, train, learn, have fun together, and empower ourselves.”

Maybe it was unexpected, but this day we came to the West Bank and saw, heard, and yes, even tasted, hope in Arabic coffee and olives, warm bread and zaatar. We dreamed of ways that these women, who gather in the West Bank to create hope and build alternatives, could meet women gathered in Canada in Indigenous or migrant communities. We know they would recognize courage and resilience in each other, and hope would spread like light.

Jennifer Henry has served as the Executive Director of KAIROS: Canadian Ecumenical Justice Initiatives since 2012.  She has worked in ecumenical social justice for over 26 years.