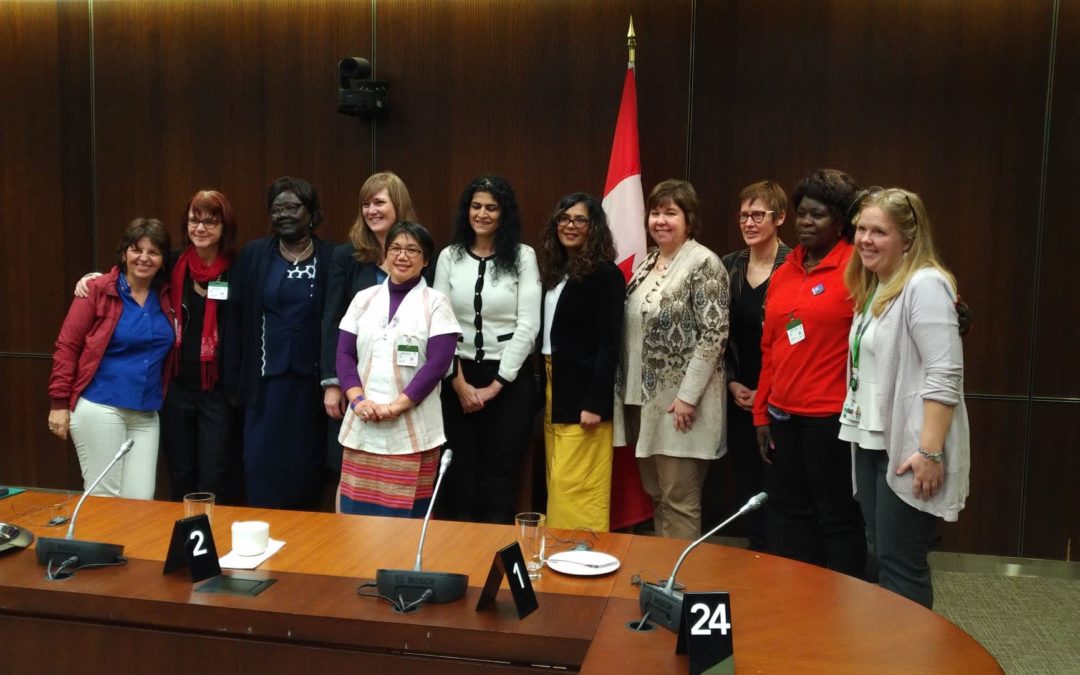 Throughout Gender Equality Week, CCIC will highlight the work that some of our members are doing to advance gender equality. This blog post was written by Rachel Warden of KAIROS Canada.

“Knowing the Organización Femenina Popular has allowed me to recover my life project, to believe in myself again, to give myself the right to feel joy, to heal emotionally and psychologically. Now, I also believe that I can help other women so that they might not experience violence and so that they believe in peace.” – Nancy, who participated in a training on Colombia’s Peace Agreement, spoke about the impact of the Organización Femenina Popular, a KAIROS partner, on her life.

This is one of many stories of change we heard during the first year of KAIROS’ Women of Courage: Women, Peace and Security (WPS) program. Participants in the program spoke of claiming their rights to heal and take legal action.

In just one year, the program undertook critical steps towards transformative change for women victims and survivors of violence in the Global South – despite regional difference, escalating security threats and political challenges.

The WPS program is based on solid evidence that women victims and survivors of violence in armed conflict and post conflict situations are empowered through psychosocial and legal support. This support helps them heal, restore their self-esteem and realize legal rights, becoming key voices in peace building processes.

During the first year, KAIROS and its partners achieved significant results despite challenges. Partners reported that a total 4,700 direct beneficiaries were reached: more than 1,000 women survivors of gender-based violence received psychosocial, over 600 women and men participated in gender awareness training and more than 1,100 women and men participated in training sessions on national and international frameworks.

Furthermore, close to 800 women were trained as human rights facilitators and 109 campaigns were organized, advocating for legislation, law reform and implementation that related to women, peace and security, including campaigns directed at male allies in government, multilateral organizations and media.

“These lessons on human rights have certainly opened my eyes to see the imbalance not only in our households, but also in our institutions,” said Captain John Jeremiah, a Chaplain who participated in SSCC-NWP’s training on gender justice and human rights.

A unique component of this program is the focus on South-South and South-North gatherings and exchanges. In November 2018, an inaugural South-South gathering brought all partners together in Toronto to share experiences and strategies. Partners later travelled to Ottawa for important meetings with Parliamentarians, government and other civil society organizations.

Key international days and events such as the 16 Days of Activism to End Violence against Women (November 25-December 10), International Women’s Day (March 8) and the United Nations Commission on the Status of Women (UN CSW) provided opportunities to highlight the partners’ work and advocate for women peacebuilders.

KAIROS launched the WPS program in 2018 in collaboration with Global Affairs Canada, which injected $4.5 million over five years to support the work of these grassroots women-focused organizations. This support is made possible with matching funding from KAIROS member churches and development agencies, religious communities and individual donors.

KAIROS’ partners are a testament to the courageous and effective work of grassroots women-focused programs in peacebuilding and are a concrete example of Canada’s Feminist International Assistance Policy in action.

Rachel is KAIROS’ Partnerships Manager. She has been involved in the human rights and social justice work of the churches for more than 20 years and in solidarity and social justice movements for much longer, starting with the anti-apartheid and divestment movement and the Nicaraguan solidarity movement in high school and university.

Rachel is an experienced Popular and Adult Educator and fearless flute player and member of the Fallen Angles musical group. Finally, but most importantly to her, she is the mother of two beautiful, wise, compassionate and independent young women.