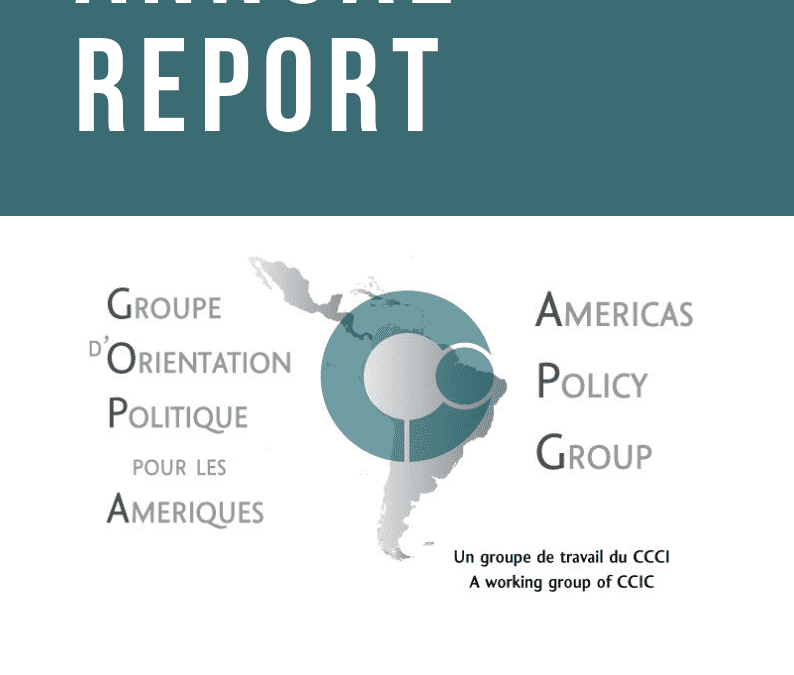 It has been an amazing year for the Americas Policy Group (APG) and its members. As such, we are proud to present the APG 2018-2019 Annual Report highlighting the work of its 29 members. It includes the group’s main activities, list of members and financial report.

Among all the milestones that we have reached, we can highlight the following collective work of the APG:

Thank you for your continued support and engagement!

Several members of the Americas Policy Group (APG) have programs or development and humanitarian assistance projects in Haiti, or take part in the solidarity movement with the Haitian people. It is for those reasons that the APG-Haiti subgroup has been created.

One of CCIC’s main mandates is to create opportunities for networking and to support its members’ representation with government authorities. In that respect, the group’s objective is:

to exchange information on sustainable development, social justice issues and protection and promotion of human rights in Haiti, and to organize meetings with Ottawa decision-makers or advocacy actions if there is a consensus over the approach to take within the subgroup.

As such, the subgroup aims to build connections among CCIC, in particular the APG, other networks and coalitions involved with Haiti such as AQOCI and Concertation pour Haïti, and the Government of Canada, mainly Global Affairs Canada.

The new APG-Haiti subgroup’s actions will allow its members to: 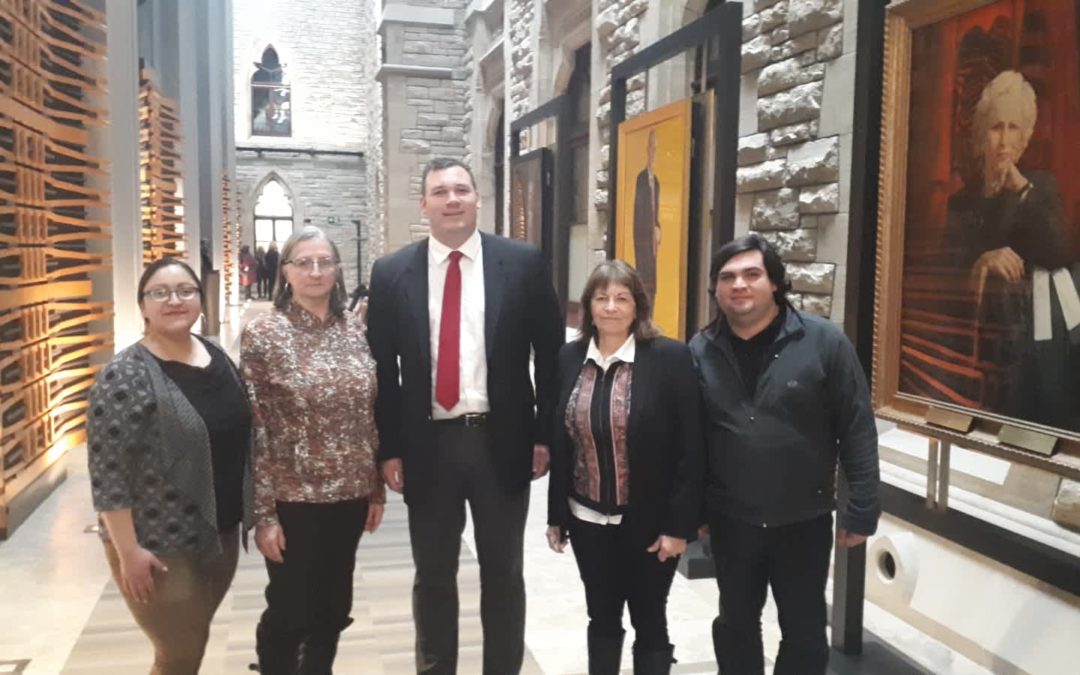 Ottawa – Feb.21, 2019. The Americas Policy Group has been highly concerned with the human rights crisis unfolding in Honduras and the incarceration of peaceful demonstrators and civil society activists, following the November 26, 2017, election. Since then, APG members have worked on the terrain and in Canada to make a positive impact and stand in solidarity with the people of Honduras.

On February 20, 2019 APG members CUPE Global Justice Fund (Kelti Cameron) and Public Service Alliance of Canada Social Justice Fund (Louise Casselman), together with APG Officer (Sebastián Vielmas) and Programme Assistant (Laura Ávalos) were present on Parliament Hill to witness the introduction of a petition to the House of Commons calling to  :

The petition was sponsored and presented in parliament by Conservative Member of Parliament for Barrie—Springwater—Oro-Medonte, Alexander Nuttell Janet Spring (mother of Karen Spring) and Christine Nugent from the Simcoe County Honduras Rights Monitor initiated this petition and were also in Ottawa to witness the tabling of the petition in the House of Commons.

Honduras is one of the world’s most violent[1] and unequal[2] countries. Violence, alongside hardship and poverty compel, each year, thousands of children, women and men to leave Honduras to make the gruelling trek to the United States in search of a better life[3].

At the same time, the state of affairs for human rights defenders continues to be one of extreme risk due to the constant violence, criminalization, and slander they are exposed to, according to the Inter-American Commission on Human Rights mission of August 2018 (IACHR)[4].

[1] 56.52 homicides per 100,000 inhabitants according to UN Office on Drugs and Crime’s International Homicide Statistics database, the second-highest score in the world (2016)

[2] Honduras is the sixth most unequal country in the world according to the 2016 GINI estimates of the World Bank.

The Americas Policy Group (APG) held its general meeting on October 1 & 2, 2018 at the offices of Development and Peace in Montreal, where 35 members from 25 organizations attended. Throughout and after the meeting the APG decisively moved towards focusing its lens on impunity and human rights issues. Country level calls were undertaken following the meeting, leading to the APG to engaging advocacy priorities in Canada.

A discussion was also held on how we can advance our advocacy priorities in Canada with strategic insights from Emily Dwyer, Coordinator of the Canadian Network on Corporate Accountability (CNCA), Rachel Vincent, APG-co-chair and Director of Advocacy and Media at Nobel Women’s Initiative and Beth Woroniuk, Policy Lead at The MATCH Fund.

Finally, members strategized on how to best fight against impunity and for human rights in Mesoamerica with direct input from partners on the ground, including Félix Molina, Honduran radio journalist, Sandra Morán, Member of the Congress of the Republic of Guatemala and Luis Mejia Godoy, a well know singer-composer and social activist from Nicaragua.

Do you want to know more about the ACF?

A high level delegation of 3 Colombian social leaders will be in Canada from October 25 to November 9, 2018.  These leaders represent the Buenaventura Civic Strike Committee in Colombia’s principal Pacific port city.

The strike won important concessions from the 3 levels government to improve community infrastructure and the collective rights and safety of the inhabitants. Yet threats against the community leaders continue to grow exponentially as plans to expand and modernize the port continue. While the Colombian government signed peace agreements in the autumn of 2017, violence against Indigenous and AfroColombian peoples continues throughout the country.

Members of the delegation include:

The delegation will be in the following cities:

Do you want to know more about the ACF?

The Americas Policy Group (APG) welcomes in Canada Secretary-Designate Olga Sánchez Cordero, who will head the Secretaría de Gobernación of the New Mexican government of Andrés Manuel López Obrador (AMLO). AMLO and its Cabinet will take office on December 1st.

Rachel Vincent and Steve Stewart, Co-chairs of the APG, on behalf of its entire membership, sent Secretary-Designate Sánchez a letter pointing out key issues for the New Mexican government and the future of the Canada-Mexico relationship.

Particularly, as eyes focus on the thousands of people now on the move to escape desperate circumstances in Honduras, the APG underscores in the letter the right to asylum for those in need of international protection and call for guarantees that no one is illegally returned to situations where they could risk serious harm due to violence.

The letter is available on its English and Spanish version below.