Improved and Expanded Version of the NextGen Database

The NextGen Database has been improved and expanded!  This online, searchable database helps to identify potential new collaborators (and collaborations) for Next Generation. The database also allows the media, students, policy-makers, and the general public to identify Canadian experts working on global sustainable development issues including international development and humanitarian assistance, but also on domestic issues related to the sustainable development goals (SDGs).

The NextGen database launched in 2017 and in its second phase in 2019, NextGen teamed up with the Sustainable Development Solutions Network Canada to link research in Canada to relevant SDGs by mapping areas of research around the SDGs/ Agenda 2030. NextGen mapped areas of research to the SDGs agenda to identify how researchers in Canada contribute to the implementation and understanding of the SDGs.

To learn more about the NextGen database, click here. 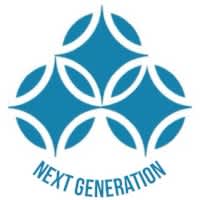 CCIC, via the Next Generation program, is launching a collaborative research project with the University of Ottawa examining how CCIC members and their partners in the Global South address gender equality and women’s empowerment.

Funded by Mitacs, this research initiative is led by Sheila Rao who is a postdoctoral candidate at University of Ottawa. She is currently doing a secondment at CCIC for this project through the Next Generation program.

Sheila will conduct a survey and interviews with CCIC members to get an overview of members’ existing organizational and human capacity to address gender equality and women’s empowerment in current programming overseas. She will also assess how this might have been influenced by current activities and progress around Canada’s Feminist International Assistance Policy. The project will run until December 2019.

Sheila Rao is an anthropologist and international development consultant based in Ottawa. Her recent doctoral thesis examined interventions in nutritional health and agricultural development in Tanzania through a feminist political ecology lens. Prior to completing her doctorate, Sheila worked in Canada and overseas for over fifteen years in project management and research communications, including several years with Farm Radio International.

Academic research institutions and civil society organizations (CSOs) across Canada are motivated to collaborate on research partnerships as a way to produce rigorous research, improve practice in the field, and shape evidence-based international development policy. But how do we ensure such partnerships remain fair, equitable, and effective? This summary report shares the initial findings from a multiple-case study of seven research partnerships across Canada that examines the power dynamics, and the political and economic contexts that affect how partners structure—and make meaning of—collaboration. 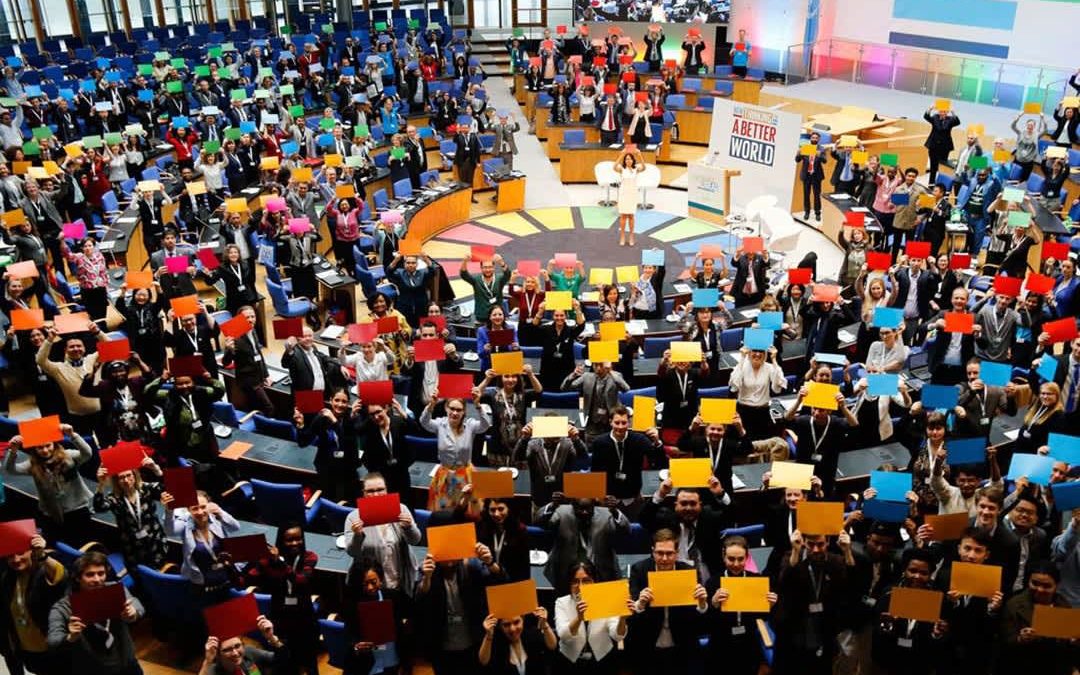 Three Things to Know about Partnerships for Development

If the countries and people of the world are going to meet the ambition of the Sustainable Development Goals (SDGs), we will need to meet SDG 17. This last (but not least) of the Goals emphasizes partnerships as an important means of achieving sustainable development. One crucial form of partnership is collaboration between development practitioners and academics – to ensure that development work is grounded in evidence, and that research is informed and guided by practice.

In the North American context, the Canadian Council for International Co-operation (CCIC) in partnership with the Canadian Association for the Study of International Development (CASID) recently released a report that identified and compiled the knowledge on collaborative partnerships in Canada and the US. These partnerships take a variety of forms, including collaborative research projects, practitioner placements in academic contexts, student internship programs, and input on training programs by civil society organizations (CSOs).

Specifically, we asked whether similar trends can be seen across North America, and whether differences between the institutional environments in Canada and the US affect the frequency and effectiveness of collaborative partnerships. The three key findings are instructive for how governments, CSOs, and academic institutions can enhance partnerships in the years to come.

1. Success depends on both internal and external factors. As demonstrated in previous studies, the success of these collaborations is determined in large part by the quality of the relationship between individual academic institutions and CSOs, which is in turn influenced by a variety of factors including the trust established through transparency and clear lines of communication.

The long-term research collaboration between Purdue University and Catholic Relief Services is an interesting example of an institutional partnership focused on mutual learning. This case and others also reveal the human factor – the importance of having people with a strong understanding of both research and practice alike, who can support and build innovative, sustainable, and meaningful partnerships.

However, larger structural factors also play a role in determining the frequency and effectiveness of collaborations. These factors include government priorities, the strategic orientation of funding agencies, the presence of organizations playing supportive roles, and broader academic and CSO cultures.

2. There is little direct government funding for academic-CSO development partnerships. With a few exceptions, including the Social Sciences and Humanities Research Council of Canada’s (SSHRC) Connection, Engage and Partnership programs, large federal funding agencies in North America (and particularly the United States) have not prioritized collaborations between academic and non-profit organizations. With few resources available, the logistical and coordination challenges of scaled partnerships may be intimidating for many CSOs and academic institutions.

By contrast, the British Economic and Social Research Council (ESRC-UK)has taken a much more proactive approach to facilitating collaboration – offering resources to help researchers identify what impact is and how to achieve it, encouraging research produced with rather than on people, and urging researchers to embrace sharing information rather than merely disseminating results (the latter often in inaccessible ways). Similar initiatives in Canada and North America could substantially strengthen the number and quality of researcher-practitioner partnerships at national and regional levels.

3. National platforms and networks have an important role to play. Like CCIC and CASID in Canada, InterAction and the Society for International Development (SID) are coalitions of members committed to end poverty in the US. They act as conveners, advocates and leaders in the global development sector at the national level. These networking and capacity-building organizations could play a powerful role as bridging bodies, capable of facilitating academic-CSO partnerships and liaisons between other entities.

As a starting point, they could use their memberships to run pilot programs to enhance collaborations between CSO members and academic research partners, such as secondments, placements, research partnerships, etc. As umbrella organizations with access to many CSOs, they could map existing partnership agreements between CSO members and academic institutions to learn more about how they evolved, the benefits of the relationship, and what outcomes and impacts have been identified to date.

Partnership is easier said than done – but the ambition of the SDGs, and indeed of Canada’s own Feminist International Assistance Policy, demands nothing less. The lessons taken from this study can help build a more enabling environment for successful development partnerships between academic researchers and civil society practitioners, through the joint contributions of government, national platforms and networks, and the partners themselves.

Emily McGiffin is a postdoctoral fellow at York University’s Faculty of Environmental Studies. She is also a research assistant on the Next Generation program.

Andréanne Martel is the Program Officer of the Next Generation program, a research partnership between the Canadian Council for International Co-operation (CCIC) in Ottawa and the Canadian Association for the Study of International Development (CASID).

Gavin Charles is the Policy Officer at the Canadian Council for International Co-operation (CCIC). 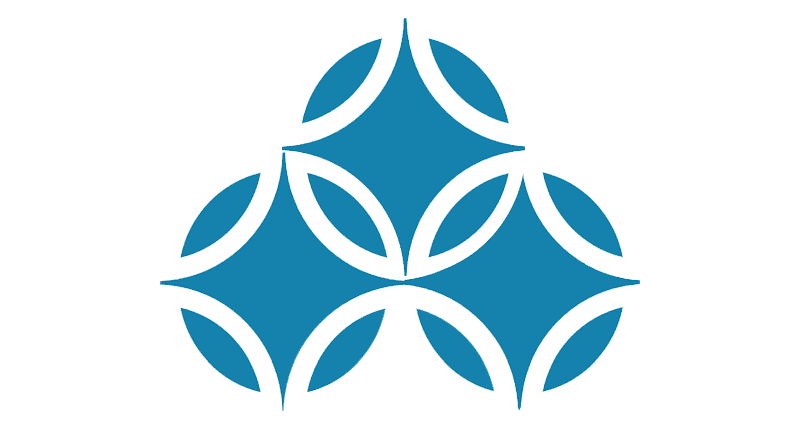 A Series on Innovative Models of Collaboration between Academics and Practitioners

The Next Generation Program is thrilled to announce the launch of an initiative to share learnings from a series of innovative models of collaboration that aim to bridge theory and practice in the global development sector! This initiative will develop a series of in-depth case studies on the challenges, strategies, business models and successes of these collaborations.

The purpose of these independent case studies is to engage and inform leaders within our sector on strategies and best practices on how they could better work collaboratively – and to inform a wider readership by making these studies publicly available.

What do you need to know?

So far, three models of collaborations from different Canadian CSOs have been selected. The Next generation program will launch the first cases in Spring 2018. The cases will provide an in-depth understanding of these models and will share learnings for the sector.  Graduate students from various Canadian universities will conduct, design and write the case studies.

The Next Generation will identify other innovative models to include in this series over the course of the program. 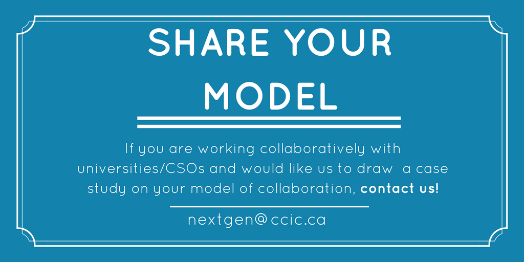 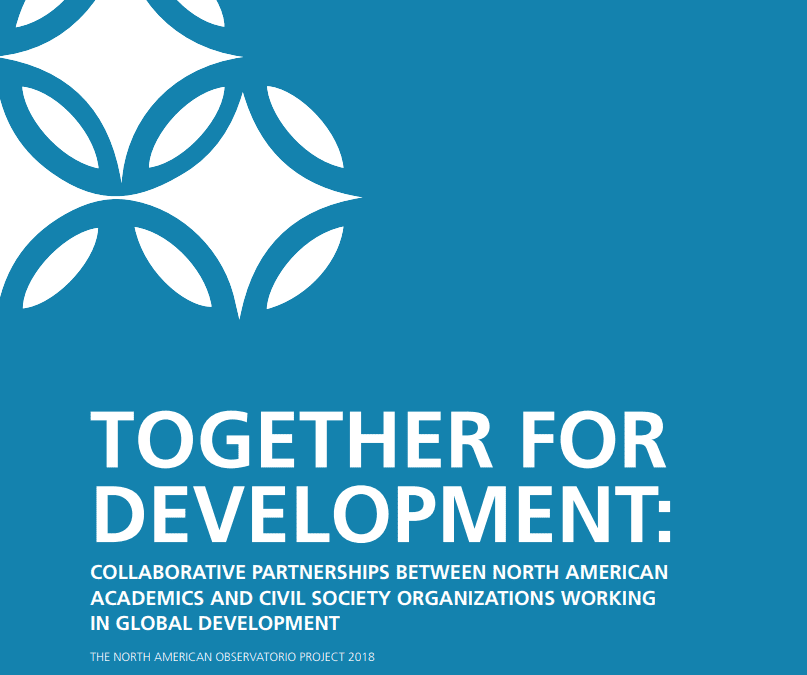